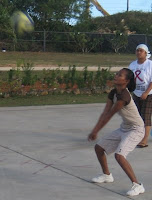 • Everyone is breathing a sigh of relief -- spring break began this afternoon. That means that the annual PIBC Days celebration will be this weekend -- fun, games, and competition. The first basketball and volleyball games were played in the mid-afternoon heat. Ugh.

• A couple of our PIBC students will be going to Saipan over the spring break to teach English to 12 Chinese garment factory workers. They will hold class at night -- between 6 p.m. and 6 a.m., when the women are off work. This is not only a service for the women but also for the local pastor who usually teaches the class and will be getting a spring break of his own.
• Researchers have discovered that dirt floors facilitate the spread of parasitic illness in urban slums. Installing cement "significantly improves children's health by interrupting the transmission of intestinal

parasites and boosts youngsters' cognitive abilities..." The Mexican government has a major program to bring cement to the poor. ~ link

• Michelle Obama put her arm around Queen Elizabeth -- and got away with it. Apparently the Queen has now entered the 21st century. ~ link

. This is probably the most useful book on church planting in the early 21st century American context. Much of

it might even be helpful for pastors trying to jump start existing congregations.

• I just became a fan of Lina Sandell on Facebook. I'm sure she will appreciate my support. ~ link
• Now the United Methodists are doing the franchise/satellite thing. It's an interesting new twist on the phenomena when the bishop pulls the plug on an old nonviable congregation and turns the facility over to a dynamic booming church which needs space to expand. ~ link
Posted by Brad Boydston at 4/02/2009