The Next Evangelicalism: Freeing the Church from Western Cultural Captivity by Soong-Chan Rah is a title that should be on every Christian leader's reading list this year. It's not that 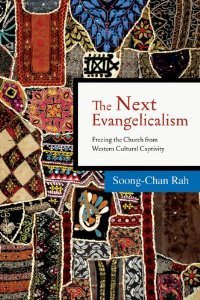 Rah is tilling new theological soil or surfacing new truths. He just does a very fine job of bringing together theological streams, historical insight, and the new cultural realities. And he does so in a way that should challenge how we move forward as a church.

In a nutshell, Rah argues that the North American church is bogged down by a Western (racially white) cultural captivity. Such an approach was more or less functional (but not always just) in the past. However, given the current global environment and the growing influence of the non-Western world in the US and Canada, we've got to step back from white dominance and embrace a new reality. In doing so we will not only be correcting injustices of the past but we'll begin to experience freedom and revival.

At times white readers might experience Rah as shrill (I've read some reviews which emphasize this) but my sense, given the overall context of the book, is that he is not at all a whiner. Rather he is simply trying to help the reader understand how white culture is experienced from the outside. His intentions are good and just -- and those of us who are white need to quit writing people off when they point out how they experience things. We're way too defensive -- if we'd relax and listen a little more we might even learn something.

Rah doesn't just take swats at white-dominated culture as a whole but he takes some shots at the church growth and the emerging church movements. The problem, he says, is that we as Westerners are quick to embrace a theology of celebration without also embracing the theology of suffering. We can learn balance from the immigrant church. Second generation immigrants (and third culture children) can mentor us as we make the transition into a multi-cultural world.

I do have a few small bones to pick with Rah. The first is that sometimes the reader is left with the sense that cultural captivity is strictly a Western problem. It's not. Every culture ends up with prejudices and pecking orders -- and non-Western cultures have been as violent about maintaining those as Western cultures. We as Westerners do need to embrace the work of God in the Global South -- in Africa, Latin America, and Asia. But we don't want to go to the extreme of romanticizing the non-Western churches. They all have major issues. Perhaps the greatest lessons that Westerners can learn from other cultures are all related to how they deal with their captivities.

Secondly, Rah characterizes globalization as the spread of American culture. I would suggest that such was the case in the past but that with the flattening of the world we can expect that global culture will become characterized by more fusion. For example, you can eat at a Mr Pizza, a Korean franchise in Bejing or Los Angeles. Even though the idea of pizza is American, as adapted from the Italians, Mr Pizza is uniquely Korean in its marketing and menu (sweet pizza). This is the direction that the world is going.

There will be a natural decline of American dominance as Asian and African forms of affluence emerge (or dominance from any one culture). IOW, the future challenge of the church may not be so much about American (and white) captivity as it is related to this emerging global fusion culture. We need to be talking about this fusion wild card.

Thirdly, Westerners will not embrace the new reality because of demographic facts. We can talk until we're blue about all the studies which demonstrate that the over-all economic impact of immigration (both legal and illegal) is positive. But ordinary Americans still perceive that immigrants are a threat because they're taking all the jobs, sucking the health care system dry, and adding to crime-levels.

Rah is not unaware of the power of impression and he does utilize several stories at the end of the book. But we're going to need more stories -- lots more stories -- stories that emerge from the suburbs and the rural areas if we're going to challenge the church to envision a new healthier future.
Posted by Brad Boydston at 7/22/2009