The drive through Utah was beautiful. Southern Utah is spectacular. We're holed-up for the night in St George, Utah where the current temperature is 104° (no complaints -- it's dry and feels good). 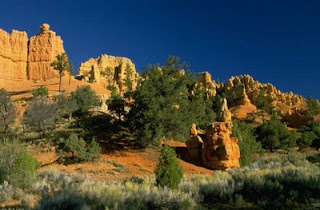 Parts of I-15 south of Salt Lake City are posted at 80 mph. That's fun -- especially when there are no other cars or trucks nearby.

Another thing which challenges popular perceptions is the fact that most of both Oregon and Washington State are arid desert -- vast open lands, much of which is farmed. Part of the desert effect is related to the position of the Cascade Mountains to the west. The mountains collect most of the moisture before the weather fronts move east with little rain left to drop.

A crop that I had never seen before is the Pacific Albus. These versatile hybrid poplar trees are being farmed throughout the drier portions of the northwest.
Posted by Brad Boydston at 7/03/2009