• Samoa is planning to switch sides of the road so they can be like the Kiwis and Aussies. There is nothing wrong with wanting to drive like them -- except that the roads were designed for right drive -- and it's going to be more hassle than it's worth to switch. Samoa already has enough problems and probably doesn't need to create more. I suspect that the politicians are just trying to introduce a distraction.

• Crime is down in Phoenix -- in spite of the bad economy. Conventional wisdom has been that crime goes up as the economy goes down. But this is not at all a textbook economic downturn. ~ link

• Was your Bible cover made by a slave? How about that cross on your wall? Hmmm. Troubling possibility. ~ link (via)

• Arizona State University estimates fall enrollment at 69,000 -- "making it the largest university in the country." (I thought it was huge and unwieldy when I was a student with 40,000 others back in the late 70's. Bigger ain't necessarily better.) I'm sure that somebody will contest that designation.

• I've heard that Indira Gandhi National Open University in India has about 2 million students. I can't think of any US university coming close to that. 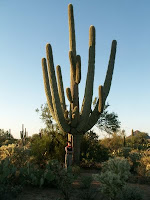 • My find of the week was a cute, very healthy, 12-inch saguaro (the most regal of cacti) on clearance at Lowes -- $20! This size saguaro typically sells for 2-3 times that amount (they're slow growers). I'd bought a 3-incher elsewhere for $8. Our 12-incher now lives in the front yard. In a few years this is what it will look like -- more or less.

• Malaysia, which already has more political chaos than one nation deserves, is up in a tizzy again, this time because of the scheduled caning of a Muslim woman who drank some beer. Muslims are subject to different laws than the non-Muslims.

• In US neighborhoods people are not just upset at the growth of house churches (with the added traffic and related parking issues) but in Chandler, Arizona they're cracking down on a Buddhist group which has been meeting in a house. Religious equality.
Posted by Brad Boydston at 8/24/2009