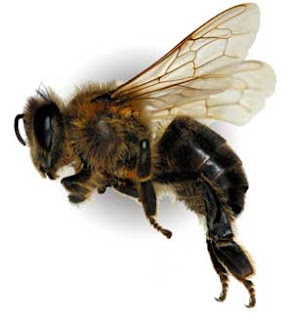 • Today is the first national Honey Bee Awareness Day. If I had known this earlier in the day I could have done something significant to celebrate -- like eating a peanut butter and honey sandwich for lunch.

• All the ink cartridges in my printer dried up during the transition. Apparently they don't sell these printers in the US (I bought it at Kmart on Guam) but Walmart still had the replacement cartridges.

• The highly profitable Kmart on Guam is bright, friendly, orderly -- a Japanese tourist destination. Sometimes it even has a community buzz as friends meet and greet in the aisles. I went into a local Phoenix Kmart this afternoon. Half the lights were out, the aisles were narrow and overstocked, it had an odor, and not much order. How is it that in this highly competitive environment they continue to function this way? My hope is that when Kmart goes under that somehow the Guam store can continue to function. It's a bit of a lifeline out there. Is anyone at Kmart corporate listening?

• Speaking of a buzz, tonight I'm listening to the Sunday morning praise and worship show on 96.5 FM Family Radio in Brisbane, Australia. They have a good pop/CCM music mix at other times, too.

• Another surprise Walmart discovery -- Albuquerque Tortillas. We haven't seen them anywhere else, yet. If you're not making your own tortillas these are pretty decent.

• Have you tried a little key lime juice on your cantaloupe?

• When the Soviet block disintegrated and the island ran out of oil Cubans became organic gardeners out of necessity -- and now they're thriving in it. A lot of the farming is done on city lots.

• Someone needs to send an emergency shipment of onions to Guam. ~ link

• Hope for the aging -- dose of reality for the young -- "(Lesslie) Newbigin wrote his 3 most significant works (Open, Foolishness, Gospel) after mandatory retirement from position of bishop at 65 in 1974." ~ Andy Rowell

• I think I made seven trips to Home Depot in the last two days (half of them trying to fix a toilet). There are still quite a few "foreclosure projects" left -- lights to hang, door to hang, shower curtain rod to hang, closet rods to hang -- other misc stuff the previous owners took with them. Fortunately, we're less than half a mile from the depot.

• Dramatic growth of uke sales in Scotland. Yes, the British Isles count as islands. (Although if you think about it, most uke players don't live on islands and don't play island music. The instrument originated with Portuguese workers.) ~ link

Why? Some kind of existential jabber.
Posted by Brad Boydston at 8/22/2009

Just an FYI On National Honey's Bee Day.... Melissa is the Greek word for Honey Bee. Isn't that sweet?