ON this date in 1941 the Imperial Japanese forces attacked Pearl Harbor, 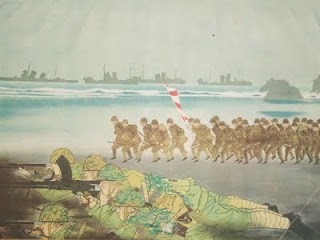 drawing the US into WWII. At about the same time as the bombing in Hawaii (except because of the dateline it was technically on December 8th) the Japanese attacked and eventually occupied the island of Guam.

The occupation was a particularly difficult time for the Chamorro people who suffered greatly under Japanese rule until the US retook the island in 1944.

I remember an old Chamorro man telling us about the hardships his family endured -- the hunger, abuse, and incarceration. He hadn't forgotten. Amazingly, though, there was no malice or anger in his voice as he told his story. He'd let all that go -- a good example of forgiveness. We don't want to dwell on the past or let the sins of the past define present relationships. But neither should we forget what happened. And that can definitely be a challenge.
Posted by Brad Boydston at 12/07/2009