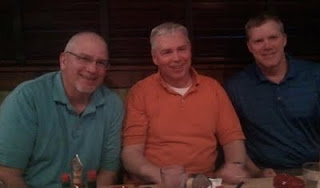 > MY BROTHER GREG (center), who lives in Idaho, is in town with his wife, DeeAnn, for a few days. So, last night we had a family dinner to celebrate our brother Gary's (right) birthday. This is the first time we've had all three brothers in a picture in years.

> FIDEL CASTRO is retiring from the leadership of the Cuba Communist Party and for the first time in 50 years Cubans will be allowed to own private property. The costly communist experiment is finally coming to an end. ~ link


The rules of age-appropriate behavior that used to be reliably drummed into us by parents and teachers, church and state, no longer hold sway. But we haven't lost faith; we've just transferred it, to scientists and celebrities. Hollywood is the home of amortality, the music industry its outreach program. "I think you should just keep going while you can, doing what you like," Mick Jagger observed at 66, ignoring his pronouncement in May 1975 that he'd rather be dead than be singing "Satisfaction" at — or presumably long after — 45... ~ Catherine Mayer in TIME


...As psychologist Vivian Diller recently noted, midlife is being redefined by the boomers who are now marking their passage through this life stage. Twentieth century notions of aging and retirement are being challenged by a combination of generational preference and financial necessity. The fastest growing demographic enrolling in seminaries are people over 50... ~ link

Nice picture. It can tell you are the elder. Congratulation for the reunion.

Love the photo! You guys haven't changed since Sweetbriar Drive in 1963. Just taller. And bigger. And, um....well, you look great! Say hi to your bros for me.