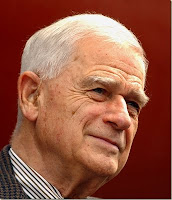 Retired Senator (and former governor of Oregon) Mark Hatfield died Sunday at the age of 89. Hatfield was at the same time a man with spine and a true statesman.

Ted Olsen's obituary about him makes the senator sound more liberal than moderate. But I suppose that is because Hatfield opposed the Vietnam war when it wasn't a popular thing to do. If fact, he was actually a highly respected Republican -- and very much a consistent pro-life Christian. He was the model politician. And I would put him in the dictionary as an example under the definition of the word "statesman."

If Republicans were to still allow people like Hatfield in their party -- I'd still be a Republican. And if we had even a few politicians schooled in his manner and who had taken his approach to heart we wouldn't be in the pickle we're in now. I'm grateful for his faithfulness and service but it makes me sad that his legacy didn't get passed down.
Posted by Brad Boydston at 8/09/2011