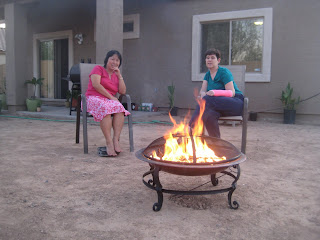 • Daisy Ho and Cheryl are enjoying our new backyard "Made in India" fireplace. (Generally speaking, houses don't have indoor fireplaces in Phoenix.) We'll eventually have some gravel in this area so that people won't be sitting in the dirt.

YS was on the cutting edge serving 70's and 80's style youth ministers. In 1971 they started the Wittenburg Door, a religious satire magazine, but sold the magazine operation for $1 in 1996. In 2006 the Christian publisher Zondervan, a holding of the Rupert Murdoch media empire acquired YS.

• The new Anglican province in North America now has 742 churches and they plan on planting 1,000 new congregations over the next five years. ~ link

• Meanwhile across the pond, 600 Anglican priests are meeting to discuss whether they should take up the Vatican's offer to do an extreme make-over transforming them into Roman Catholic priests. ~ link
Posted by Brad Boydston at 10/23/2009