> The story behind the fail whale illustration ~ SF Chronicle

> "Could Acacia trees solve Africa's hunger problems?" Not likely -- but they could help, when so much aid actually hinders. ~ CSM

> If there is a gun handy and sitting around, people try to solve their problems with them -- which, of course, has the opposite result. Short-cuts rarely work. Yet another gun crazy Arizonian story.  ~ KTAR

> In the early 1990's the typical urban Chinese saved 15% of his income. Today he banks 30%. Unlike in the West, "as Chinese incomes have grown, so has their propensity to save." ~ Time

> Will drought keep Phoenix from rising again from the ashes? "The coming collapse will be catastrophic." ~ Three Sonorans

> Hey! All you bowl fans flocking to the valley for some desert heat and football, the weather czars say that there is a chance for snow on Thursday night. That happens occasionally in Phoenix -- usually just toping the mountains around the edges of the Valley. 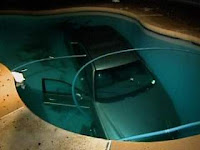 > Why is it that out of control cars are so drawn to swimming pools around here? If it were not for the fact that the elderly driver did not survive it would be humorous and we'd all be making jokes about carpooling. ~ ABC15

> "Learning from Finland: How one of the world’s top educational performers turned around" ~ Boston Globe


The secret of Finnish educational success is that in the 20th century Finns studied and emulated such advanced nations as Sweden, Germany, and the United States. Finns adopted some education policies from elsewhere but also avoided mistakes made by these leading education performers.

What could the United States learn from the Finns? First, reconsider those policies that advocate choice and competition as the key drivers of educational improvement. None of the best-performing education systems relies primarily on them. Indeed, the Finnish experience shows that consistent focus on equity and cooperation — not choice and competition — can lead to an education system where all children learn well. Paying teachers based on students’ test scores or converting public schools into private ones (through charters or other means) are ideas that have no place in the Finnish repertoire for educational improvement.

Second, provide teachers with government-paid university education and more professional support in their work, and make teaching a respected profession. As long as teachers are not trusted in their work and are not respected as professionals, young talent in the United States is unlikely to seek teaching as a lifelong career.

Finally, with the fourth PISA study again showing that the US education system is lagging those in many other countries, Americans should admit that there is much to learn from these systems. Relying on one’s past reputation is probably not the best approach for transforming an educational system to meet tomorrow’s needs and challenges. With America’s “can do’’ mentality and superior knowledge base in educational improvement, you could shift course before it’s too late. ~ Pasi Sahlberg