> THE WORLD'S most typical person is...
> WHY ARE we so attracted to toxic leaders? ~ link

> WHY ROGER OLSON feels at home with the British evangelicals (me, too). It has nothing to do with the accent. ~ link

> "A BASIC axiom of all criticism is 'Before saying "I disagree" be sure you can truly say "I understand".'” ~ Roger Olson

> RANDOM RULES for ideas worth spreading -- Okay, church leaders, do a little translation for your context. ~ Seth Godin

> MIROSLAV VOLF: "The two (Yahweh & Allah) are one God, albeit differently understood." ~ link 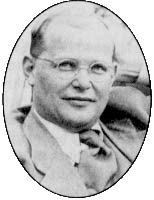 > DR MARK Thiessen Nation, professor of theology at Eastern Mennonite Seminary, has broken new ground in the story of Dietrich Bonhoeffer. He, and two student authors, are challenging "the long-held assumption that Dietrich Bonhoeffer, the German theologian and pastor, was arrested, imprisoned and executed because of his involvement in plots to assassinate Hitler." Instead, they are arguing in a book to b published next year "that it was Bonhoeffer’s costly discipleship—which led a Nazi official to call him 'a pacifist and enemy of the state'—that led to his arrest, imprisonment and execution." ~ link (via)

> WHICH IS the new Calvinism? “Neo-Puritanism” or “Neo-Calvinism?” The Friends of Kuyper are trying to reclaim their label -- "Piper, Discoll, and Mohler are not 'Neo-Calvinists,' they are actually 'Neo-Puritans.'" I think the fans of Abraham Kuyper (who was an awesome thinker, theologian, and government leader) just need to get used to the fact that their neocalvinism is now the old Neo-Calvinism. It IS a shame that the new Neo-Calvinism isn't more like the old neocalvinism. Not all things new are an improvement. ~ link (via)

> SACRAMENTO just can't catch a break these days. Now the Kings might be moving to OC. ~ link
Posted by Brad Boydston at 3/06/2011