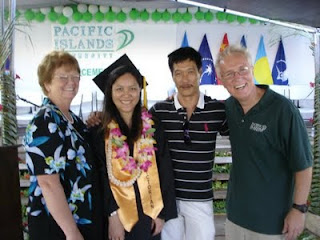 > THIS IS a picture (not from the PDN) of our good friends -- Mary Johnson, Xuefen Mei (Valedictorian and new PIU grad), her husband Danny, and Pastor Jeff Johnson, Mary's husband.

> ANOTHER BEST-SELLER in the making? Arizona governor Jan Brewer is writing a book that she is calling "Scorpions for Breakfast: My Fight Against Special Interests, Liberal Media, and Cynical Politicos to Secure America's Border." ~ KTAR

> ARIZONA IS celebrating its centennial next year. "Putting the AZ in crazy for 100 years." ~ E.J. Montini, AZ Central

> ONE OF Customs and Border Protection's surveillance balloons broke loose of its moorings in strong winds yesterday. It then crashed (and by some accounts burned) into a neighborhood south of Fort Huachuca in southern Arizona. Those ballons are not small. ~ KOLD

> THE SUBURBAN POOR -- "The suburbs now have the largest poor population in the country." ~ link

Email ThisBlogThis!Share to TwitterShare to FacebookShare to Pinterest
Labels: PIU