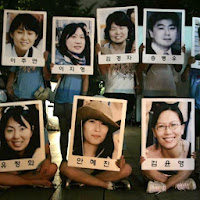 ~ The Korean hostage crisis continues -- so does prayer. This is one of those situations in which the Taliban has more to gain by holding on to the hostages than even in negotating for something else that might make them happy. Their greatest desire right now is to show the world that they're in control -- that they are powerful people who can yank everyone's chains. If there is a negotiated end to this thing they lose their platform. So there is probably not a lot of motivation to wrap things up quickly.

~ 4% of Americans don't have land line phones at home, relying instead on cell phones. We're among them. However, there are times when we're tempted to get a land line because the mobile phone coverage here is spotty and when we want to make or take a call we have to stand in a certain part of the house. But so far we've resisted.

~ "Young adults are leaving the church in droves."

~ Scientists have discovered the universe's largest known planet, made of mostly hydrogen, temperature of 2,300°, 20 times larger than Earth, 1,400 light-years away. NASA has not announced an exploration mission nor have the Russians attempted to claim it. There are benefits to distance.

~ Japanese go for American weddings in Paris -- and Hawaii -- and even closer to home, but not mentioned in the Telegraph article, Guam. There are 10,000+ Japanese weddings on Guam every year -- nearly 25% of the overseas Japanese weddings. 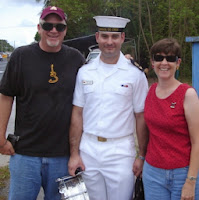 ~ More than one million saved.

~ Lisa Dy sent us a picture that she took of Cheryl and me with one of the sailors from the Armada de Chile during the Guam Liberation Day parade last month. He's the guy in white. Cheryl is the one in red. And I'm the one with the ASU cap and trendy fashion lenses.

~ First mentions in the NY Times -- The Simpsons, iPod, George W. Bush, and his successor Barack Obama. (via)

~ Careers of the future and a quotable: "One warning: Job burnout does not come from long hours, it comes from not being able to have an impact at work, according to Ayala Pines, author of Career Burnout: Causes and Cures. The fastest job burnout is in burn units because nurses can't alleviate pain. Thus, it's not hard to imagine that providing medical assistance to the terminally ill might be a rapid ticket to disenchantment and burnout."

This is where the writer is mistaken. There are lots of people who thrive in high stress areas. They do so by defining "impact" differently than most people -- thankfully.
Posted by Brad Boydston at 8/08/2007

The thoughts on young people and the church really hit home and are a challenge to me. How many young people I've known who really, for one reason or another did not see church as vital to who they are or their relationship with God. I'm afraid too many.

I did see in the Vineyard church we were a part of a significant number of young people. I'm not sure what's going on there, though connections and flexibility on what resonates with them, certainly are factors.