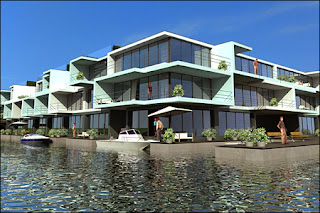 ~ Australians have bought into desalination in a big way -- very big. "Almost all of Perth's fresh water now comes from the ocean. And soon 20% of Melbourne's and Sydney's will too..." -- Link

~ Another adaptation to the changing climate is movement toward floatable houses in Holland. -- Link

~ It so mild in Sweden this winter that they're already harvesting potatoes. -- Link

~ "In the modern world, we tend to reduce the complexity and diversity of the Scriptures to simple systems, even when our systems flatten the diversity and integrity of the biblical witness. We reduce our sermons to consumer messages that reduce God to a resource that helps the individual secure a reduced version of the 'abundant life' Jesus promised. And the gospel itself gets reduced to a simplified framework of a few easily memorized steps."- - Tim Keel in "An Efficient Gospel?" -- Winter 2008 issue of Leadership Journal.

~ Thomas Monson -- the next LDS prophet and president? I suspect that he'd continue to encourage the slow creeping movement toward a more historical form of Christianity. -- Link

After participating in the dialog and seeing where they've been -- how far center they've moved in what they now emphasize -- and the levels of openness on part of leadership, I believe that it could happen. There are still very significant gaps at this point but when you consider their fluid understanding of revelation and the role of the prophet -- who knows what direction they'll go. Whatever happens we still need to act respectfully and lovingly toward them.