How long will we tolerate this?

Apparently, Glenn Beck, who has 6.5 million listeners, said on his show a few days ago that, "First Lady Michelle Obama has 43 on her staff while Nancy Reagan had just three." 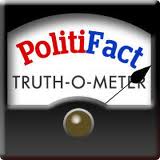 The reasonably objective (they seem equally willing to go after conservatives and liberals) PolitiFact did some fact checking on this claim and found that, "Michelle Obama has a staff of 25, not 43 as Beck claimed. Nancy Reagan had a staff of about 15 (not three, as Beck claimed). The size of Michelle Obama's staff is similar to that of her immediate predecessors." ~ link

How is it that this personal dislike of the Obamas has become so intense that pundits like Beck feel justified in making up such outrageous claims? Why is it that we tolerate people who try to advance their causes through the presentation of such blatantly false information? If Beck were operating in the realm of anything but politics he'd be arrested for misrepresentation.

Honesty has to count for something!

It's time that the radio stations pull the plugs on pundits who consistently misrepresent verifiable facts about their opponents -- whether they be liberal or conservative. Truth and honesty need to trump dollars. "Better to be poor and honest than a rich person no one can trust." ~ Proverbs 19:1 (MSG)
Posted by Brad Boydston at 3/04/2011

Is it possible that staffer Beck has are just poor at checking their facts? I highly doubt this, bur I would like to think that he is reading off of inaccurate cue cards and not just speaking from the top of his head. May I ask you a question about him? Does it bother you that so many Christians support a mormon?

I'm more concerned that so many people who call themselves Christians don't have any problem supporting fear-mongering and fire-breathing radio pundits who are indifferent to facts. Glenn Beck has made outrageously false statements before. If he is reading from info provided by staff then he needs new staff researchers.