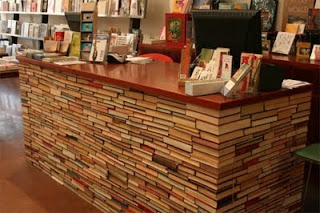 COOL THINGS you can do with analog books -- since we don't seem to be reading as many of them now. ~ link

AND THEN SUDDENLY it became popular to build malls again. ~ Glendale | Chandler

NO NEED to travel far to expand your cultural horizons ~ link

RESEARCH: Born-again Protestants, Catholics, and those with no religious affiliation have a smaller hippocampus than people associated with mainline Protestant churches. Apparently everyone but the mainliners suffer from chronic stress. I'd suggest that more study is necessary on this one. ~ USA Today

EXTREME RATINGS DROP -- Fewer people are listening to "right-wing" talk radio. Rush drops 30% in six months. Have we turned a corner? Have Americans finally decided that they don't want to be characterized by that tone of discourse? ~ link

EDUCATIONAL INNOVATION -- "The price of college is going to fall, and the Internet is going to cause that fall. The rest of it is really difficult to figure out." ~ The Atlantic

"A UK STUDY suggests that overall, plastic bags have less environmental impact than paper bags or even reusable canvas bags." And you can bring the plastic to us when you're done. Our church is trying to help the local Girl Scouts collect 32 million plastic bags. The bags will be used to manufacture Trex composite lumber for the Leadership Center at Camp Sombrero. ~ link

SINGAPORE AIRLINES is planning to start a long-haul budget carrier next year. I surely wouldn't mind scoring a cheap ticket to Singapore -- a bit sticky but a great place. After being on Guam for a year I landed in Singapore for some meetings and it felt like the whole city had been manicured by Walt Disney. ~ BBC
Posted by Brad Boydston at 5/26/2011